Fenton, along with several other students, founded the Larry Legend Foundation student group in 2009 with the goal of having a permanent recognition piece for Bird at Indiana State. The group's fundraising efforts began with T-shirt sales on campus and at Sycamore basketball games with all proceeds going towards a Bird statue that would be taller than Johnson's. Their motivation and dedication inspired an ISU graduate to fund the statue in its entirety.

The Statue
The Larry Bird Statue was dedicated on Nov. 9, 2013. Standing 17 feet 1 and 1/8 inches tall (more than five feet taller than Johnson's statue), the statue is housed on the south side of Hulman Center, Indiana State's basketball arena.

The Larry Bird Statue is part of the University’s growing outdoor art collection.

The Artist
The statue was completed by Terre Haute, Ind. artist Bill Wolfe. Wolfe specializes in life-size sculpture and has several sculptures and paintings throughout Indiana and as far east as Webster, Mass. He had a particular interest in the Larry Bird sculpture as he is an avid Bird fan. Wolfe attended Indiana State University and studied art. 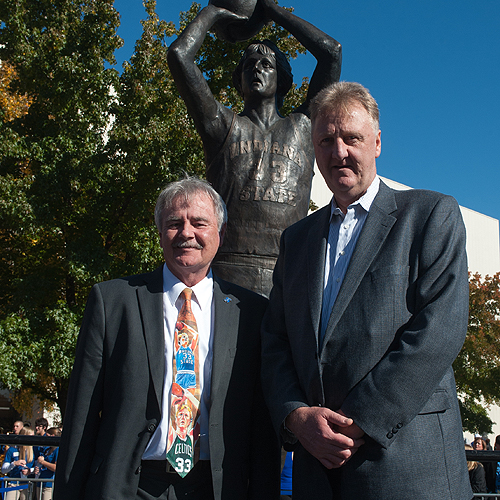